Early yesterday morning, as we heard a loud crash and ran to see, we quickly realized something was terribly wrong. At first, we thought we were dealing with an intruder as it sounded like a very big crash. What we actually heard was my dad falling when he had blacked out and was unable to cry for help. As my mom rushed to the phone to dial 911, I was holding onto my dad with all my might trying to make sure he didn’t fall any further. As dad became conscious enough to realize something was wrong, being the stubborn man he is, he tried to get up and walk. While begging him to sit down, unexpectedly another blackout occurred and I found myself trying to do everything in my power to hold him up so he didn’t hit the floor. There were no warnings to what we encountered. There were no signs that would have given us a glimpse of what we were about to face.

As the paramedics rushed through the house, they found themselves staring at a very clammy sweaty man who could not comprehend what was happening. The paramedics rushed my dad to the hospital. For the remainder of the day, he was whisked from one end of the hospital to the other having tests being performed to try and figure out the cause of the blackouts.

While dad was being wheeled for another test, mom and I decided to take a break and get some air. As we walked down a hall, I had an overwhelming sense to stop and turn back. Now of course, I’m not in the right mind frame to determine what was happening but when God speaks, I always try to listen. So I asked mom to hold on a second and I turned back. When I did, I noticed a young lady sitting in a waiting room. She was doing everything she could to compose herself. I instantly found myself by her side asking if she needed help. And then that’s when the tears started flowing. She explained that she came to the waiting room to take a minute for herself as they had just lost her grandfather. As mom came to my side, somehow – some way we had the strength to be there for this young lady. We started hugging her and just listening, letting her speak to strangers without judgement. Letting her show all her emotions so that she too could find the strength in helping her family through their difficult time.

It is in moments like these that you have absolutely no clue why this happens. We had heard the code blue. We had instantly prayed for the family and the doctors, yet at the time of hearing the commotion, I found myself being grateful that it wasn’t dad.

But there in a tiny waiting room, we found ourselves caught up in this young lady’s hurt and pain…comforting, loving, and hugging until her strength returned to face all the decisions they were finding themselves unexpectedly having to make the day before Thanksgiving.

A while later, we ran into this young lady’s family as they were being whisked to the funeral hall. The young lady looked up with such grateful eyes and whispered a soft thank you to mom and I. In the middle of their sadness, the young lady had an uncompromising peace found on her face that the other family members did not. She was going to be the rock in the middle of the family’s turmoil. God was using her to bring comfort and peace to the family.

So as you sit down to your Thanksgiving meal, I pray that Thanksgiving has a whole new meaning for you today and I hope that you realize that there is so much to be thankful for. Whether you are with family or you find yourself miles way…be thankful to the Lord for he knows the how, why and when. He will always place us where we are needed the most in sometimes the craziest of moments. But if we will listen and obey, it will always work out for someone’s good. Because in the middle of your chaos, help arrives when you least expect it and in very unexpected ways. 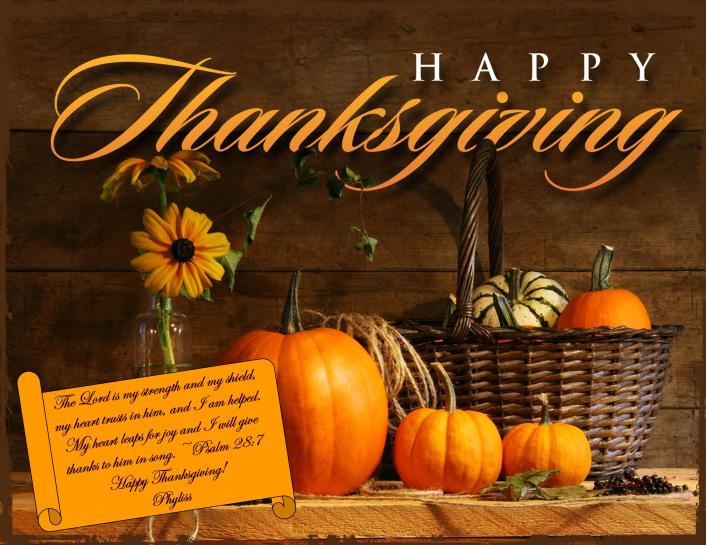 Note: Please disregard any advertisement you may encounter under this posting as the author does not endorse them. Thank you.

Books shown below are available on Amazon.com. Just click on the Book Picture for more information.

My Personal Journey Through These Crazy Economic Times